An illegal dog breeder who earned £150,000 while keeping more than 40 animals in squalid conditions on a farm has been imprisoned.

Alison Bransby, 61, kept dogs and puppies in log sheds and kennels barely the size of rabbit cages at her home in Telstoke, Shropshire.

The RSPCA and police raided her property in February of last year and discovered 41 suffering animals, including 35 dogs, living in appalling conditions.

Two cats, a horse, a lamb, a terrapin, and an African gray parrot were also seized from White House Farm by investigative officers.

A court has heard that Barnsby raised £150,000 from 2017-2021 illegally from breeding and selling the dogs along with radiographer Kayleigh Barnsby’s daughter, 31.

The mother and daughter ran the “extensive” business and advertised the project online while “putting the profit on the health of their animals”.

Dozens of animals were found on the farm with serious injuries and health conditions. This pregnancy was found with trauma and ulcers on the lower eyelid 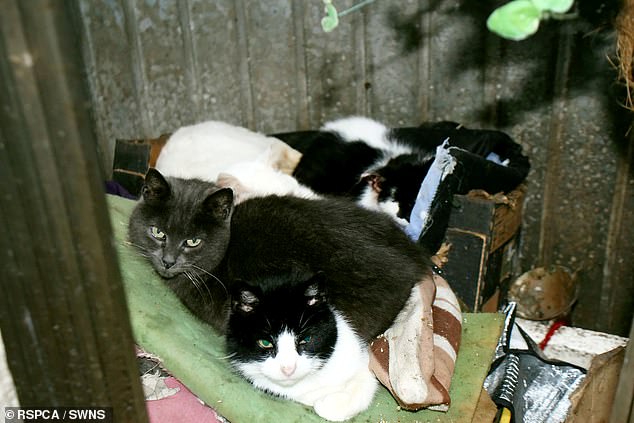 Animals, including dogs and cats, were kept in appalling conditions on a farm in Shropshire 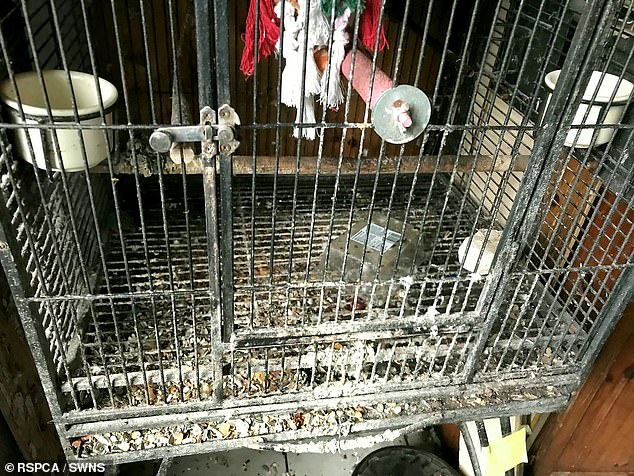 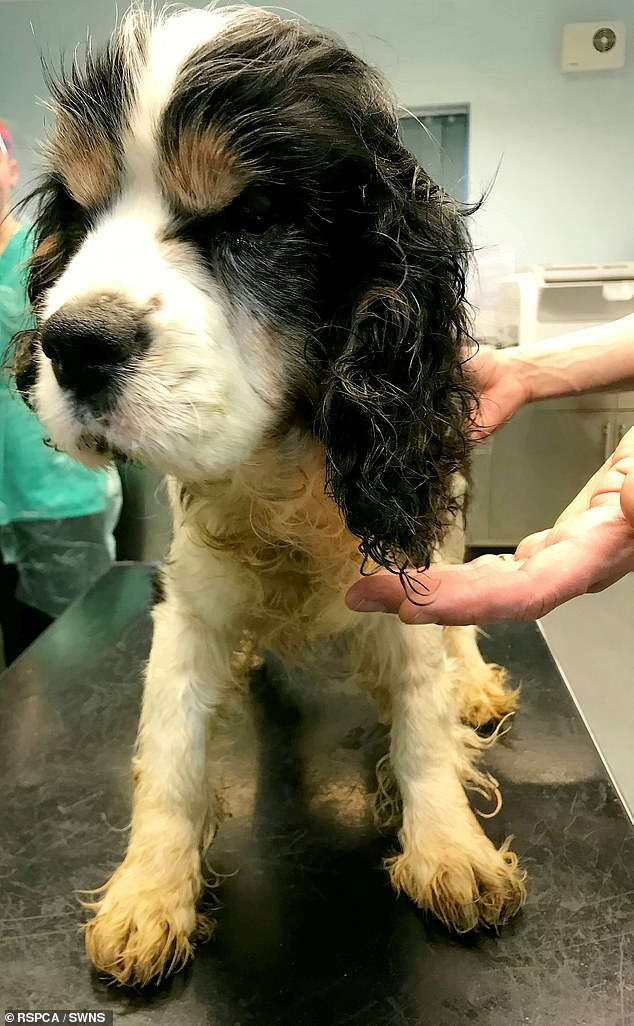 King Charles Spaniel Teddy was found blind, deaf, and stained with his own urine. The judge said he “used his whole life for financial gain.” Teddy was put down by the vets to avoid further suffering

She was imprisoned for 22 weeks, denied keeping all the animals for life and ordered to pay £44,000 in costs at Kidderminster Magistrates Court last week.

Her daughter confessed to nine animal-related crimes and was given an 11-week prison sentence suspended for 12 months. She was also banned from keeping animals for ten years and ordered to pay £20,000.

District Judge Ian Strongman said Bransby had long known she couldn’t cope and knew there were organizations that could help.

He added that although the cruelty was not intentional, it “occurred over a long period of time” and it was clear that the animals were suffering.”

The shocking photos released by the animal charity after the case show the cramped and filthy barns in which the animals were forced to live.

The court was informed that an investigation had been opened following complaints from members of the public who purchased puppies and dogs from the farm that later became ill.

RSPCA investigators found dozens of other neglected animals on the property, which a vet said had not been adequately cared for for at least nine months.

Among them was a blind and deaf Calver King Charles named Teddy, believed to have been used for breeding, draped in a plastic bed in the corner of a dark kitchen.

The emaciated old dog had one tooth in its mouth and its fur was stained with urine.

Such was his carelessness that he was put to sleep on veterinary advice to prevent further suffering. 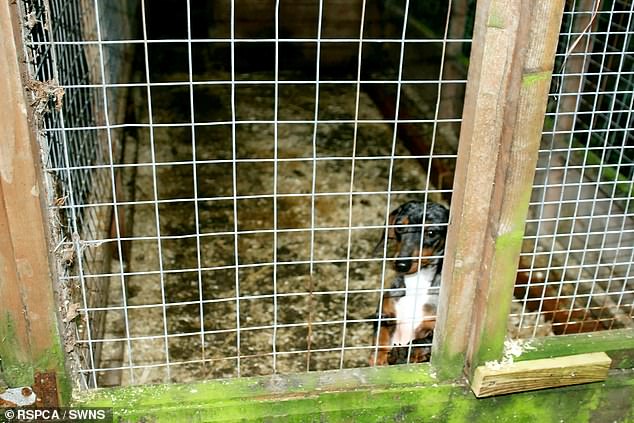 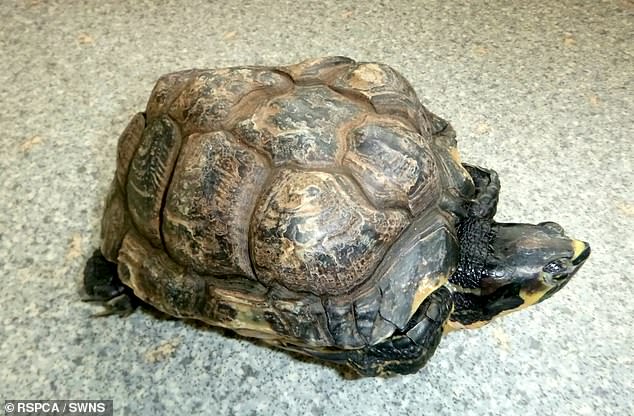 The tortoise, a type of tortoise, had a seriously deformed shell as a result of its abuse 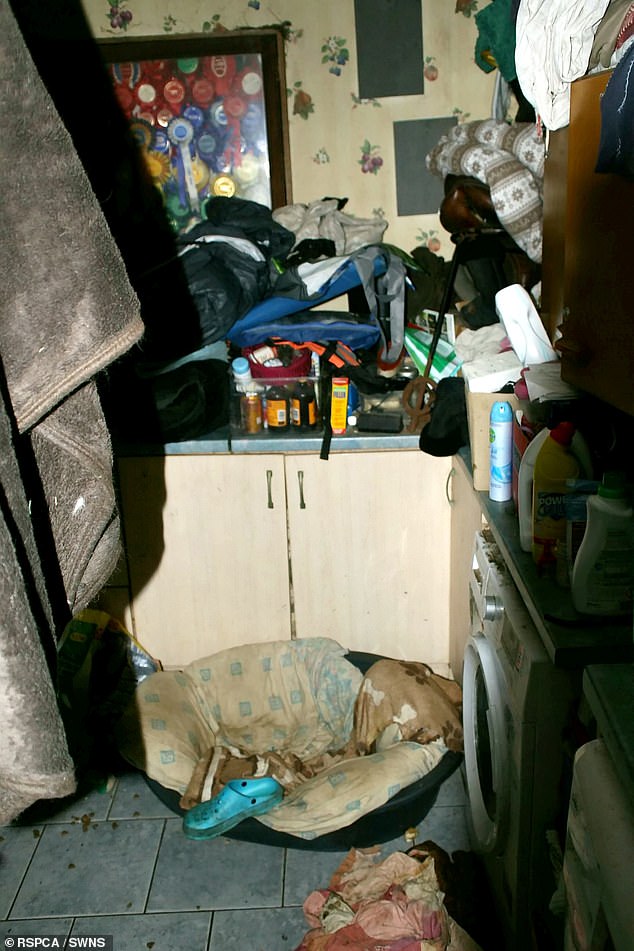 More than a dozen dogs – some with significant underlying health conditions – live in dark, scattered, unsanitary conditions in the kitchen with limited access to water and bedding

Eight puppies, bred to a one-eyed mother dog, were found in an outdoor kennel barn without water whose basic standards for animal husbandry were not met.

Another 15 dogs – some with serious underlying health conditions – lived in dark, scattered, unsanitary conditions in the kitchen with limited access to water and bedding.

They also found two cats with significant ear disease, a lamb with bruises and ulcers on the lower eyelid, and two terrapins with a severely disfigured shell.

An African gray parrot with significant loss of feathers in its chest was found living in a filthy cage with a thick layer of dry faecal matter.

“There were wooden sheds with fixed doors,” Kate Parker, the RSPCA inspector who led the memo, said in her testimony.

Inside, I could see a typical breeding set up for puppies, with a heat lamp angled over a plastic dog bed, an empty bowl and some soiled rags inside the bed. 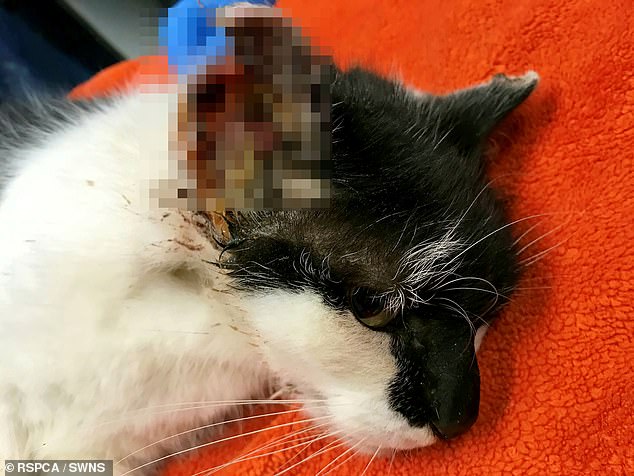 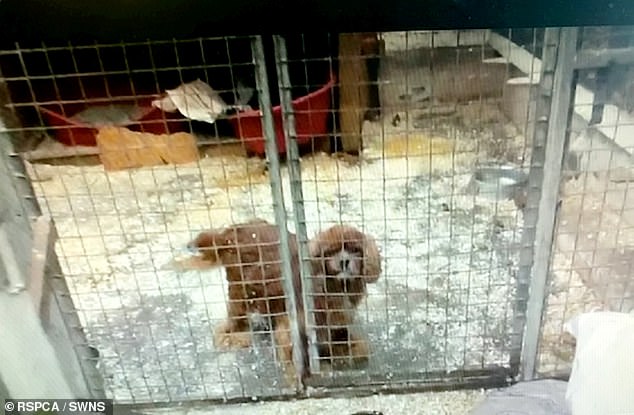 RSPCA officials said the dirty farm “shows what can happen when breeders and sellers put profits before the health and well-being of their dogs.” 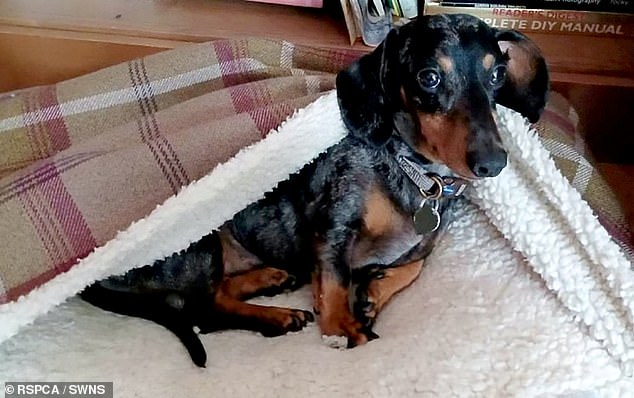 The Bransby made £150,000 by raising dogs they kept in appalling conditions

Inside a simple building there was a row of kennels made of metal.

There was a thin layer of sawdust on the concrete floor, clutter, household appliances and electric cables dangling inside, each of which dogs could reach.

“I offered Allison Bransby the opportunity to sign animals who were interested in the care of the RSPCA to help reduce the numbers and ease the difficulties of caring for them on site, which she did not agree to.”

Another RSPCA inspector, Mike Scargill, added: “The door of the house led into a very dark corridor where there was a cage on the left side containing an African gray parrot.

Excrement covered every surface of the cage and the bird showed signs of feather plucking around its chest.

The ground was wet with feet and smelled of strong urine. Then I went to the kitchen area.

“The smell of urine in this area was compelling and the floor was sticky to walk on.”

A veterinarian said none of the animals had been provided a suitable environment and not enough steps had been taken to protect them from pain, injury, suffering and disease.

The vet added: “It was abundantly clear from the layout of the property, the dogs present, the previous advertisements and the presence of the puppies, that the property was being used as a kennel facility, which is not licensed.

As such, the dogs had to be housed in a dwelling that complied with a licensed breeding establishment, which places specific requirements regarding space availability, as well as the materials from which the kennels are built.

“Outdoor dog pens and pens in which the dogs were housed were well below licensing standards, so my expert opinion is that the dogs’ environmental provisions were not appropriate to their needs.”

To mitigate, the court heard that Allison Bransby had physical and mental health problems at the time of the crimes.

Her daughter moved to the farm to help take care of her mother and the animals in January 2021, but she admitted she was not being looked after properly.

The RSPCA Animal Centers in Leicester, Birmingham and Aylesbury, with the help of a number of the charity’s sponsors, took in the animals. Since then all but three have been moved.

Ruby the horse and the two cats were also put to sleep on veterinary advice to prevent further suffering.

Speaking after the ruling, Inspector Ian Briggs of the RSPCA’s Special Operations Unit said: “We would like to thank the West Mercia Police officers for their assistance and support in this longstanding case and for their time and assistance on the day it was. Difficult and troublesome conditions.

This shocking case shows what can happen when breeders and sellers put profits before the health and well-being of their dogs.

“The stud dogs used on puppy farms are not much talked about but Teddy was the saddest example.

Blind and deaf, the defendants had used him all his life for financial gain, yet in his final months he did not even have the kindness of his comfortable resting place and was simply forgotten, only left to lie in his urine.

“We always encourage anyone considering getting a puppy for adoption rather than buying, and do a lot of research first to make sure they source a dog in a responsible manner and they don’t end up piling up the pockets of irresponsible people making money out of misery. “

West Mercia Police’s Hannah Lister, PCSO, said: ‘West Mercia would like to thank members of the public who have come forward to express their concerns about the farm, and to the RSPCA for their assistance, support and guidance in securing the charges against them. Alison and Kylie Bransby.

“We want to send a clear message that if evidence emerges that people have committed cruel crimes against animals, we will work with our partners to bring them to justice.”