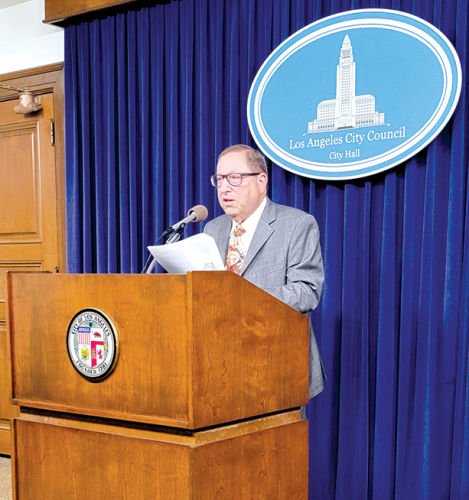 Los Angeles City Council member Paul Kuritz, Fifth District, revealed a debit report on the state of the Los Angeles Department of Animal Services as well as a set of suggestions for improvement. (Photo from the Fifth District office)

The Great Recession of 2007 and 2008 and the COVID-19 pandemic compounded decades of mismanagement, resulting in a network of shelters across the city where dogs live in unclean kennels and are irregularly walked and exercised, and cats, rabbits and small animals are kept. Poor conditions, volunteers and hired staff are colliding, Kuritz said, and not enough animals are adopted or cared for.

With the aim of improving these conditions, on October 7 Koretz released a 46-page report on the state of the department along with a corresponding package of 11 proposals.

“I have worked hard to focus this report on providing recommendations on how the department can take steps forward to serve Angelenos and animals in department care. I hope the report will lead to a healthy and productive discussion,” wrote Koretz, who chairs the Board’s Personnel, Reviews, and Animal Welfare Committee.

The report addresses seven general concerns, each of which is broken down into greater detail: animal care, adoption and foster programs, shelter facilities, the volunteer program, employment, community relations and “other issues.”

The proposals call for more than $3 million to be made available to LA Animal Services, city officials and departments to revamp the department’s hiring practices, reform the volunteer program and improve facilities and animal treatment.

Kuritz spokeswoman Ali Simard did not say when the city council would vote on the proposals, though she added that “it is important that [the Personnel, Audits and Animal Welfare Committee] To push movements through [the council] As soon as possible.”

“[The department] We are committed to serving our community by providing programs and resources to keep pets and their families together, and to ensuring the safety and well-being of animals, inside and outside our shelters in our communities, and the people who love them. Agnes Seibal, a spokeswoman for LA Animal Services, said…

She added, “While increasing funding and adding more staff will help address some of the concerns, animal welfare is an ongoing collaborative effort between the city, the community and our department. As a municipal shelter, there is always an opportunity to do more, including ways to better engage the community and educate it about sterilization.” and neuter their pets, licensing companion animals and providing other available alternatives to surrendered animals, so our shelters are not the first or only choice for pet owners when facing financial challenges.”

Elaine Smolson and her husband, Brad, co-founded Operation Love Blankets, a non-profit animal welfare organization that provides supplies and pet food to shelters, helps homeless pet owners and teaches children to care for pets humanely. They agreed that city shelters were short of staff, volunteers and outreach to the community, and hoped Kurtz’s proposals would be a fresh start for the beleaguered organization.

Eileen Smolson added that shelters have seen inconsistent hours since the start of the pandemic, further reducing people’s chances of adopting or caring for animals, and she and her husband called on the department to resume normal working hours.

She said making appointments with the department became so difficult that Smolson resorted to adopting a dog from Mexico instead of one of the city’s shelters.

Although the Koretz report did not call for a change in shelter hours, it recommended that the city relax its COVID-19 quarantine protocols, end current requirements for city employees to quarantine for 10 days after exposure, and instead require a five-day quarantine days and a negative test.

Perhaps the most substantial movement is calling for the city to transfer $3 million in emergency funds from the reserve fund to this year’s LA Animal Services budget to cover the cost of strengthening the spay and neutering program, increasing funding for the citywide cat program and strengthening the budget. For food, operational needs and animal enrichment programmes.

Koretz made another proposal to earmark funding for the department, calling for $100,000 to be transferred from the city’s general purpose fund to the Animal Welfare Trust. The suggestion stems from a question posed by one of the department’s critics, who asked why the trust isn’t being used to hire more staff to supplement the dog walking program.

“Trust funds can be used to hire consultants or contractors to handle various specific tasks that department staff cannot perform at a given time. Thus, the Animal Welfare Trust can be used to bring in consulting firms, non-profit organizations and/or individual experts to meet the needs of different departments. .

Several of Koretz’s proposals seek to review and restructure the department’s operations, including a call to review employment qualifications and train animal care technicians. The ACT has a responsibility to keep kennels clean, but there are so many dogs that it has become an almost impossible task, according to the report.

The council member also made suggestions for the department to report to the City Council within 30 days with plans to ensure all dogs are regularly exercised and properly attended, and to ensure the best possible treatment for cats, rabbits and all other small animals during their stay in the city’s animal shelters.

With the number of staff in shelters dwindling, recruiting more technicians sometimes becomes more difficult due to the unfriendly atmosphere among the staff, according to the report.

Complainants who have submitted to the department via the Targeted Local Employment Program note that the training required is inappropriate for them and that existing employees sometimes make derogatory remarks and [are] mentioned the report.

With these complaints in mind, Koretz also proposed that the department report to the city council within 30 days on its program for integrating targeted local interns into shelter operations, “including training, mentoring, and other measures to give them the best chance of success in their work for the department, and ways in which the program can be improved.” Another proposal instructs LA Animal Services to report to the city council within 30 days with a plan to ensure better performance of the Joint Labor Management Committee.

That suggestion also reflects a complaint from the report, which cited an LA Animal Services employee who said JLMC would improve problem-solving and communication at shelters if they were held frequently.

But the Smolsons also urged better rhetoric between management and the public.

“We need better communication so we can adopt more animals,” Brad Smolson said.