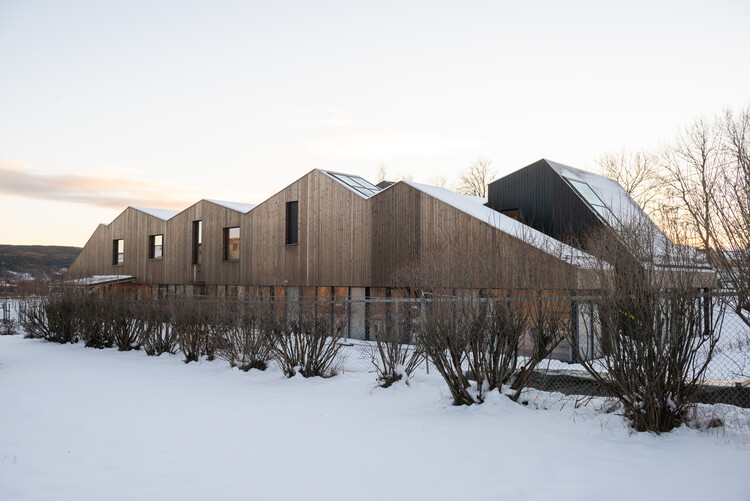 Site. Nordtveit Farm Kindergarten is located in the northeast of Oslo in the county of Kalpäken. The Kindergarten is adjacent to and interacts with a farm which is open to the public. The farm has a riding field, a farm and animals that one can visit. In the immediate vicinity, there is also a public swimming pool, library and apartment buildings.

The building as a third landmark. Educational research shows that children’s learning and development processes occur in interaction with other children, teachers, and the physical environment. The Kindergarten can therefore be considered a “third teacher” according to the curriculum of the teacher Reggio Emilia. So shape, light, colours, materials, smells, sounds and the local climate were important factors during the design process. The children’s perspective was very important. We wanted to capture children’s imagination and understanding of the world and design a kindergarten where the building itself is guiding. Kindergarten ensures a safe environment for children. At the same time, Kindergarten facilitates play, learning and physical activity through spatial contexts where light, shadow, contrast in room sizes, sounds and smells create unusual places. The building challenges children’s motor skills as well as their imagination.

Adapt to the place. The kindergarten adapts to the surrounding environment by having a farm-like character. The architectural expression is a wooden volume raised on columns, which can give associations to a traditional Norwegian “stab” (traditional Norwegian granary on farms). Unlike the “stabbing”, the rooms on the ground floor are enclosed in glass. This ensures bright, transparent interiors and views towards the outdoor play areas, the farm and its animals. The second floor of the kindergarten is a continuous wooden ceiling. The roof volume is divided into a series of gabled roofs that contribute to an architectural relationship with the farm buildings. The meeting between the usual ground floor plan and the irregular wooden ceiling forms a series of different rooms inside and a very diverse section. A path runs through the roof and forms a series of small and large outdoor spaces. These spaces make it easier for children to stay and play. Thus the roof area becomes part of the play areas in the kindergarten.

Sustainable wooden building. The kindergarten is built of massive wood using cross-linked plywood (CLT). 3D pre-fabrication facilitated the realization of a building with complex geometry and varied room sequences. The load-bearing structure and interior walls were built using CLT. The continuous glass facade on the first floor gives the kindergarten a transparent character and creates a good visual connection between the interior and the exterior.

Clear glass windows are used in certain areas to ensure privacy and reduce unwanted solar heat gain. Norwegian pine ore is used to cover all exterior walls. Daylight and passive solar heating are put to good use. Large window surfaces reduce the need for artificial lighting during the day, and warmth from the sun is absorbed and stored in the concrete floors and CLT walls, reducing overall energy consumption. The kindergarten is connected to the local heating system in Oslo. The building is characterized by efficient space use and at the same time a large area due to the large difference in ceiling heights and the extensive use of large window surfaces.

interior. The interior surfaces are cross-laminated wood apart from some walls in wet areas and walls in the basement. This makes the kindergarten strong, with a good indoor climate and atmosphere. Exposed solid wood gives the nursery a pleasant indoor climate while creating a warm and homely feel. New research shows that children’s heart rates are lower in wooden buildings. Moreover, the wood is strong and can withstand nails, crayons and mechanical stress, while aging with dignity.

the outside. The outside areas have been given a natural feel. Existing vegetation and the use of natural materials such as grass, bark and gravel are maintained on all surfaces, including driveways and playground surfaces. The outer surface is free of plastic and asphalt. The outdoor areas are organized and divided into zones so that different activities can be done simultaneously, including hiding places where children can enjoy the experience of playing unnoticed by adults, places to grow food and take care of animals such as chickens and rabbits. Social interaction. Kindergarten outdoor areas are open to the public outside of kindergarten opening hours. The design and availability ensured that the kindergarten would function as a public urban space, and it became a popular social space in the neighbourhood. At the same time, the residents of the local neighborhood feel the ownership of their colleagues and contribute to the care of the place well.